Tianjin is a bustling metropolis located on the northern coast of mainland China. With a population of more than 15 million people, it is the world’s 6th most populous city. It is also one of four national city centres in China and an important economic hub. Tianjin is also known for its vibrant culture, beautiful natural harbour, and amazing buildings.


If you are moving to Tianjin this year, you should be very excited! You can make the Tianjin removals process easier by hiring a specialised international removals company like Schepens. We perform many removals to Tianjin each year and know the logistics of the journey well.

All of our UK to China removals are performed by staff trained to British Association of Removers (BAR) standards. These industry-leading standards cover all aspects of the removals, from the packing materials used to the number of cargo insurance plans offered to clients. Our adherence to these standards ensures your removal is performed professionally.

This guide will take a closer look at Tianjin and explain why so many people are moving to Tianjin from the UK. We’ll also share some reasons why Schepens is the best choice for removals to Tianjin and other parts of China.

Why move to Tianjin from the UK?

Tianjin offers residents countless economic opportunities and an exciting lifestyle. It is one of the most sophisticated cities in China and an important global city. Some of the many reasons why people move to Tianjin include:

Tianjin is a very prosperous city with a strong economy

The strength of Tianjin’s economy is staggering. In 2016, it had a GDP of 1.65-trillion yuan ($252 billion) and the economy grew by 12.4%. This amazing growth rate has no sign of slowing down and the city is quickly becoming one of the world’s most economically successful locations.

The Chinese government has made Tianjin a focus of economic development and financial reform. They have invested heavily in the city’s infrastructure, which has led to it being transformed over the past few decades. The most successful industries in Tianjin include shipping, logistics, finance, manufacturing, science and technology, transportation, pharmaceuticals, and biotechnology. People often move to this city to further their career or to start a new business.

Tianjin has a vibrant culture

People have been settling in Tianjin for thousands of years, because of the close proximity of natural waterways. The area officially became known as the Tianjin county during the Qing Dynasty. It became an important port in the 19th-Century and has grown rapidly since then. Because it is a trading port, the Western influences can be seen throughout the city, including churches, pubs, and businesses. There are regular cultural celebrations in the city, along with many incredible museums and historic sites.

Living in Tianjin is affordable

Unless you want to live in the middle of the central business district, accommodation is quite affordable in Tianjin. Food, clothing, and electronics are also much cheaper than in the UK.

There is a lot to do in Tianjin

Tianjin is a bustling city full of activity. There are many activities to enjoy and sights to see, including:

“I want to thank you for the very good service you offered me and I recommended your company to my friends. Every step of the process was very professionally done and your crew consists of nice and competent people. Thank you very much for everything.”

Why use Schepens for removals to Tianjin from UK? 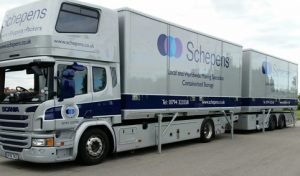 Schepens is a large international removals company that has been performing removals to Tianjin for many years. The main reason to choose Schepens when moving to Tianjin from UK include:

We are a 4th generation family owned company

Schepens began business more than 100 years ago. Since then, we have established a reputation for being one of the most reliable, affordable, and secure international furniture removals companies. Our family is proud of the reputation that we have built and committed to upholding it.

Schepens is a large international removals company, with processing facilities and storage facilities in many countries. The large scale of our operations helps us to operate very efficiently, which leads to cost savings on our China removals. These cost savings are passed on to our clients, helping us to provide affordable Tianjin removals.

100% free quotes for all UK to China removals

All international removals to Tianjin receive a 100% free quote. Our quotes are highly detailed and clearly outline the services that are included with your removal to Tianjin.  We list the cargo being moved, the delivery schedule, the cargo insurance plan selected, and much more. The quote also lists the total price. Unlike many other international furniture removals companies, out total price is all you will ever pay — there are no hidden extras.

Schepens perform removals to and from all major towns, cities and areas of China including Guangzhou, Shanghai, Beijing, Shantou, Shenzhen, Chengdu, Dongguan, Hangzhou and Wuhan!

If you require removals to Tianjin, Contact Schepens today on 01794 323 558! Our friendly staff members are waiting for your call!

Removals to Tianjin was last modified: April 19th, 2018 by schepens

Schepens offers a small moves service across the UK, as an alternative to hiring a man and van. This service is ideal for moving just a few items, such as a student move, or for moving specific large items such as a piano.