Granada is a prosperous city located in Andalusia, Spain. Known for its rich history, delicious food, and vibrant culture, Granada attracts many migrants from the UK each year. It is also one of the most beautiful cities in Europe.

If you are moving to Granada this year, choose an experienced European removals company like Schepens. We are a family owned company that has been in operation for over 100 years.  Our team regularly performs removals to Granada and we know the city well.

Each removal is managed by one of our skilled move coordinators and performed by our highly trained removers. All of our Granada removals are all carried out with a very high level of professionalism, efficiency, and safety. Our talented staff makes furniture removals to Granada look simple!

This article will take a closer look at Granada and explain why it has become a top destination for UK migrants. We’ll then go on to explain why Schepens is the #1 company for removals to Spain from the UK.

Why are so many people moving to Granada?

Granada is a historic city that dates back to 5500 BC. It has grown to become one of Spain’s most successful cities and is growing at a rapid pace. The most common reasons why people move to Granada from the UK include:

Granada has a high standard of living

The standard of living in Granada is higher than most other Spanish cities. Wages are high, crime is low, the public infrastructure is very good, food is delicious, housing is affordable, and consumer items are cheap.

The people are incredibly friendly

Many cities claim to have the friendliest people in the country. When it comes to Granada it is actually true! There are countless cultural and social events in Granada each year, making it easy to meet new people. There are also large communities of expats, so you will meet many other Granada residents who have come over from the UK.

Granada has a successful economy

If you are looking for work or interested in starting a new business, Granada is the perfect location to move to. The economic success of the city was initially based on agriculture. In the past century, other industries came to the fore, including healthcare, education, manufacturing, tourism, and professional services. Granada typically has a lower unemployment rate than the rest of the country and residents have more disposable income.

Granada is a unique city

Because Granada is so old, it contains remnants of many civilisations. It has a combination of European, Spanish and Moorish cultures in terms of food and architecture. You will find Moroccan, French, Italian, and Middle Eastern influences throughout the city. There is nothing else like it.

Families moving to Granada will be happy to discover that the schools in Granada are very good. They are well funded and staffed by talented education professionals. Spanish educational standards are very high, so your children will obtain an education as good as the one they might receive in the UK.  Some of the best schools in Granada include:


Useful Resources for Moving to Granada

These resources will help you plan your move to Costa Da Luz!

“Thank you again for all your work, the delivery went perfectly and all items are accounted for. I would also like to add that Sara and I have both said on numerous occasions that Schepens is probably one of the best organised and professionally operated companies we have ever come across. We continue to be impressed!”

Why Choose Schepens For Removals to Granada? 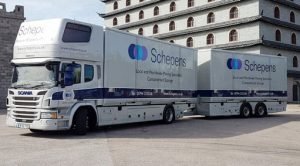 Schepens is one of the most experienced European removals companies in the world. Some of the best reasons for choosing us include:

Schepens is a very experienced European removals company. Because of our experience and size, we can obtain discounts from suppliers and offer clients very affordable Granada removals. Even though we are one of the most affordable movers to Granada, we never compromise on the quality of our service.

Our uniformed removers are trained to the strict standards set out by the British Association of Removers. These standards cover everything from how items should be packaged through to which contingency plans should be in place.

All European removals managed by a move coordinator

Each client moving with Schepens is assigned a dedicated move coordinator at the start of the removals process. They will help you through the entire process, offering you advice and answering any questions you may have.

Furniture removals to Granada use our modern fleet

Schepens uses our fleet of modern removals vehicles for Granada removals. These vehicles are specially designed to haul cargo long distances. They feature air ride suspension and an adjustable barring system to keep your cargo safe. All vehicles feature security alarms and are only driven by trained professionals.

Please visit our Spain Resources page for all the best info for moving to and living in Spain.

Schepens has the expertise and local knowledge to make your furniture removals to Granada simple and stress-free. For more information, contact our highly experienced move coordinators today on 02380 070071 to discuss your requirements!

Removals to Granada was last modified: May 11th, 2018 by schepens

Schepens offers a small moves service across the UK, as an alternative to hiring a man and van. This service is ideal for moving just a few items, such as a student move, or for moving specific large items such as a piano.